The namesake for my social media production company and someday soon I hope, a restaurant in Canada, is adopted from the boat Nonsuch that sailed into the ice infested waters of Hudson Bay in northern Canada for what was to become the Hudson’s Bay Company. The ships name means “unequalled”. The Hudson’s Bay Company is a Canadian icon that is highly symbolic of the trading relationship between the first nation aboriginal community of Canada and the early European visitors to the ‘new found land’.

The painting of the Nonsuch above was commissioned from celebrated nautical artist Patrick O’Brien and for which it is my cherished dream to see hanging in my restaurant. In the meantime, we have given the name Nonsuch to our 32 foot pleasure boat in which we can be found enjoying the waterways of Abu Dhabi most weekends.

On the south coast of my home province of Newfoundland, there exists a most spectacular bay called Nonsuch Bay near which my husband caught his first Atlantic salmon. The painting of Nonsuch Bay by Newfoundland artist Brenda McClellan holds a very special place in my heart as it was one of the first gifts that we gave each other. 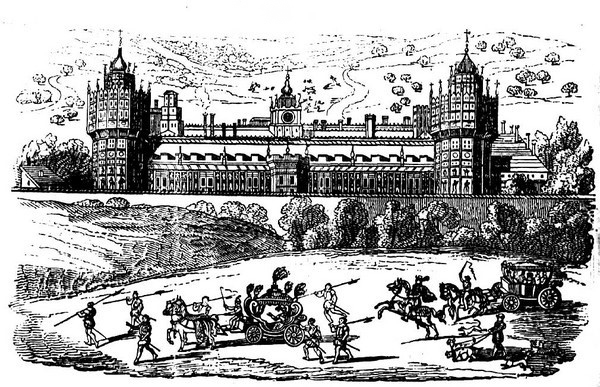 The earliest adaptation of the name Nonsuch that I am aware of was for Nonsuch Palace which is considered the greatest and grandest building project of King Henry VIII. You may have noticed that the closing animation crediting my Production Company in my Shifting Sand’s series is the transformation of an animated Nonsuch Palace into a Stove. For Nonsuch Palace, the name Nonsuch was selected as a boast that there was no such palace elsewhere equal to it in magnificence. The location of the palace was chosen so as to be near the King’s favorite hunting grounds.

When the special day comes for me to choose the location of my restaurant, the choice will be based on proximity to the Mi’kmaq Qalipu Tribes ancestral lands which to this day are recognized for bountiful fish and game such as salmon, moose, caribou and geese as well as abundance of produce, herbs, mushrooms and berry’s including the celebrated wild partridge berry and bakeapple (see above photo).